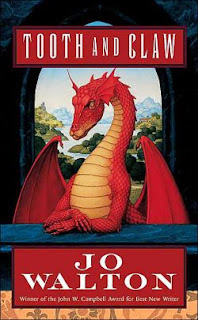 Jo Walton recently mentioned her problems with writing science fiction: she knows too much and not enough science. Many people have suggested solutions for the particular example she discusses in this text, but the general questions about the connection between science and science fiction is exactly what I've been exploring in these interviews (see what Mike Brotherton, Alastair Reynolds and Peter Watts had to say).

Here follow the questions (that's the parts in bold face, obviously) and the answers from Jo Walton.

If I'm picking holes in the science it's either ridiculous or the book
is annoying me for other reasons. I find if I like the story and the
characters enough, I'll forgive it anything but the most egregious
things, but if those things aren't working for me, I'll start picking
holes in the science. Sometimes even if I do like a book I'll ask my
husband how plausible something is, if it strikes me as either wildly
unlikely or totally cool. A lot of people complain about the science
in The Sparrow by Mary Doria Russell, for instance, whereas my problem with it was the psychology. People don't act like that.

Do you think that the science in science fiction can be an obstacle to readers as well as writers?

Yes. I think reading the science is one of the
"SF reading protocols" Delany talks about. A Physics major once returned The Forever War by Joe Haldeman saying he stopped reading it because he couldn't figure out the tachyon drive. (One might answer that if he could figure it out he'd be rich and we'd have extra-solar colonies!) But really a science fiction reader just breezes right past the tachyon drive because it's not what the book's about. The tachyon drive is a little signal saying "We have FTL travel and extra solar colonies. Moving right along to the interesting stuff..." Even if he could have learned that reading protocol though, he'd have been one of those people who nitpick about windmills on Mars. I suspect the more science you know, the more this is a problem until all you can read is Hal Clement and Carl Frederick.

And then from the other end you get readers like my aunt who interpret everything as metaphor. Someone reviewed Kelly Link and said they couldn't understand what the zombies stood for. Sometimes a zombie is just a zombie... there are things you can read that way, but that's
not the way to bet.

In your experience, are there readers who get their ideas about science primarily from science fiction? What does science fiction contribute to the understanding or misunderstanding of science (disregarding the fact that a very small part of the population actually reads sf)?

I'm one of them. I don't have any post O Level science education -- in Britain you have to specialise early. So I haven't studied any science since I was fourteen, and then only physics and chemistry. Everything I know about science I know from SF, and from my husband reading Nature and synopsising the cool bits.

One of the problems this has caused me is what I call "past shock", when you find out where science and technology actually is and you can't believe how primitive we are. For instance, I assumed for years that Apollo 11 had got to the technology of Heinlein's "The Man Who Sold the Moon", and I was horrified when I found out the space shuttle was the first spaceship to have an airlock. I'd been reading about airlocks for a long long time!

Another problem is when I come to write SF everything I know is second hand. I hate that. When I was whining about this on my livejournal someone suggested that what I should do is actually get a science education now. I'm thinking about looking into that. I'm in North America now, where there are "Physics for Poets" courses, not Britain where it would mean starting over again having made different decisions at 14.

Generally though, it's positive. I mean when the newspapers started having very serious discussions about the ethics of cloning, I was incredulous. Hadn't they read Cyteen by C. J. Cherryh?

I don't think you can learn all that much specific science from any one piece of SF, though there are some pieces of Clarke and Heinlein that really seem as if they're teaching you solid engineering. But if you read a lot of random SF from all periods you are thinking about the ideas of science. There are certain SF givens which might well be wrong and which you might learn wrong, but generally if SF writers are working from actual science and not from other SF (so they're not me!) then if you read a lot of random SF you're going to pick up some random science. Certainly you'll pick up the SF way of looking at the world as something that changes and has possibilities. A lot of people who don't read SF tend to think that the world has always been the same and always will be, and even if they read history there's a tendency to think that the world is leading to an inevitable and better now. SF encourages a way of seeing where we are as a point on a line that extends in both directions. SF teaches you the future isn't going to be the same as the past and the present, and that there are multiple possible futures and choices matter.

Then there's the other thing where you get sci-fi movie simplifications of things making their way into public consciousness, so you have people thinking about cloning who haven't read Cyteen but have seen Jurassic Park. That can be a problem. I heard that in movies they deliberately get the science wrong.

A mad scientist is a cheap way of doing some plot things quickly. They're usually a cop out the same as any randomly mad person in fiction -- "Nobody would do that! That's mad!" "OK, well, the character is mad!"

Written SF has moved on from having cheap cliche characters, mostly.

Thinking about it, I can't think what I've read recently that has scientist characters of any kind. Kim Stanley Robinson's Forty Signs of Rain and sequels do. Alistair Reynolds's Pushing Ice. Chris Moriarty's Spin Control. But I think it's less usual to have scientists at all, most SF these days isn't about people creating a new technology or whatever, it's about people living with the consequences.

More about Jo Walton and her writing on her own web site.
Posted by Åka at 9:10 AM