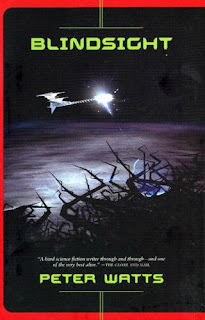 Here's a new interview about the connections between science fiction and real science. This time Peter Watts answers the questions. The first time I really noticed his name was last summer, when Nature had an issue with special focus on science fiction. If I had been following the awards better I would have known that Blindsight was nominated for the Hugo last year. Peter Watts is a marine biologist. He lives in Ontario.

Here are my questions, and Peter's answers. Read all of these interviews together, and you will have something similar to the "Mind Melds" at SF Signal, only different.

What is the relationship between your own interest in science and in science fiction? You said in Nature that they bit you at the same time, through a freind's aquarium and a CBC dramatization of 20,000 Leagues Under the Sea but to what extent are they aspects of the same interest?

They're pretty much flip sides of the same thing. In one case I'm performing a thought experiment, in the other a real one, but in both cases I'm looking at available data and trying to figure out where they lead. The difference with writing sf is that you don't have to fellate various funding agencies to pick up the tab; you don't have to twist your research proposal around to suit whatever agenda the politicians of the day deem to be "important" research. You can take on much bigger, much more profound issues. And not least, you don't have to actually know all that much about what you're exploring. You don't have to spend ten years building painstaking expertise in the lachrymal secretions of herring gulls (or whatever you've locked yourself into) before you can play around. You are, after all writing fiction. Nobody holds you to the same standard.

The down side, of course, is that you have to fellate your readers, who can be a much tougher lot to figure out. And you have to simultaneously fellate your publishers, who as far as I can tell don't have much real insight into what the readers want (at least, they pretty much wrote Blindsight off as dead coming out of the gate, which in retrospect was not a particularly good read on the market). Also, of course -- because you're not an expert on the subject of your thought experiment -- you're a lot more likely to get it wrong.

But that can be a feature as much as a bug; scientists who write science fiction tend to lose their extrapolative imaginations when writing about their own field of expertise, because they know too many arcane reasons why any particular scenario wouldn't work according to the current model. It straightjackets them. Vernor Vinge and Robert Forward show much less imagination in their extrapolation of computer tech than in other aspects of their work, whereas folks like Gibson and Delany -- with no science background at all-- seem far more prescient. In my own case, the bona-fide experts who seem to find my stuff most inspirational don't hail from the marine
biology crowd at all, but from the AI community-- an area in which my expertise is, shall we charitably say, limited. Go figure.

Do you think that science fiction is mostly helpful for promoting
scientific ideas, or does it multiply the misconceptions? Does this matter at all?

It depends on whether you include televised, cinematic, and gaming sf in your definition of "science fiction". If you only consider the written form, then it's a mixed bag -- some authors are fabulous at raising awareness, others only feed the misconceptions -- but it doesn't really matter because nobody's reading that stuff anyway any more. We are, as Jeff Vandermeer put it, "in the last days of literacy".

But if you widen the net to include sf tv, movies and games, well, everybody watches that stuff-- and very little, if any of it, does anything to promote scientific ideas. Old-time Star Trek played around with the occasional nifty concept in its day, but deteriorated into unforgiveable cheese back before the turn of the century. Stargate and its ilk-- at least, those episodes I've seen-- are utter crap. The most substantive shows out there-- Battlestar Galactica, which is fucking brilliant, and the short-lived Firefly, which was at least pretty clever-- earned their stripes by pretty much ignoring science entirely, and focusing on human and philosophical issues (and Firefly did a major disservice to scientific verisimilitude by pushing the whole old-west metaphor way past the breaking point. I mean seriously: in what universe does it make sense to move whole herds of cows between planets, rather than transporting frozen embryos?) And while I love the sf gaming scene as much as anybody-- I'm a big Half-Life fan, and BioShock swept me away-- the science in those things shooters is pretty pathetic.

(That said, the way Freeman's ex-supervisor treats him in Half-Life is a pretty decent reflection of a lot of prof/grad-student relationships I've seen...)

So, bottom line: No. Nobody reads the stuff that does, on occasion, treat science seriously, and the stuff everyone devours shows no real respect for science.

Actually, let me back up a bit: I've been unexpectedly impressed with the new "Terminator: Sarah Connor Chronicles" series. It's far from a perfect show-- there are some significant internal inconsistencies, and there was some really stupid biology in a couple of eps-- but they've also had some remarkably decent biology snuck in around the edges on occasion. It's the only show I can think of that makes explicit and ongoing reference to things like Vinge's Singularity and Moore's Law; it's full of literary and historical references to everything from Lord of the Flies to that
eighteenth-century fake chess-playing automaton, "The Turk". None of this is cutting-edge-- I mean, Vinge wrote his essay in "The Coming Technological Singularity" 1993-- but that only makes it all the more remarkable that other shows haven't dealt with such things. So I hope that series comes back. I think it shows promise.

Does the way science and the Scientist is depicted in popular culture influence how scientists think about themselves and what they are doing? In your experience, does science fiction have any influence on science?

In my direct experience, not so much. There are the usual tales of all the people who got the whole aerospace bug from sixties Star Trek and grew up to work at NASA, but Star Trek-- for that matter, most science fiction-- is not generally about scientists. There's that sf think-tank SIGMA that Bear, Niven, and Pournelle among others part of; they consult with government muckety-mucks on everything from SDI to nuclear waste disposal. But that's sf informing politics, not science.

Of course, there are myriad cases where some skiffy writer imagines this that or the other piece of future, only to have something like it appear thereafter in the real world-- but I think you'd be hard-pressed to claim that one inspired the other. Would the submarine remain uninvented if Jules Verne hadn't done "20,000 Leagues Under the Sea"? Would Second Life not exist if "Snow Crash" had never been written? I'm told that the AI elements of one of my novels inspired some guy down in Lawrence Livermore Labs to think about his own work in new ways, but I'd be surprised if that drove anything approaching a breakthrough, let alone one that wouldn't have occured otherwise. Correlation is not always causation; I think it's more likely that sf writers keep tabs on where science is going anyway, and sometimes manage to beat science to the punch.

This is not to say that science is never informed by science fiction, just that it happens far less often than the coincidence of prediciton/realisation might suggest. Maybe it's analagous to smokers and lung cancer: Statistically, tumours bloom in smokers so much more often than nonsmokers that there's gotta be some kind of link-- but when you zoom in on individuals, you can never be sure that this particular cancer wouldn't happened even if the victim never puffed in his life. There are just too many confounds.


In my experience, biology is the hot science now. Many physicists talk about biological applications of physics. But how is it in the science fiction field? At a recent convention there was a panel of scientists, answering questions from the audience. They were all physicists and astronomers, but noone seemed to think that something was missing. Is physics (and astronomy -- also physics) the essential science? Do you get the feeling that biology and biological ideas get less attention in science fiction than physics and astronomy?


Certainly that's been the case traditionally, but I don't think it applies any more. Biology is the headline science of the twenty-first century so far, and I think that's being reflected in the more recent sf to come down the pike (mine, for example). If con panels still emphasise physics and astronomy, perhaps that reflects the "graying of fandom" we keep hearing about; perhaps panels are disproportionately populated by the TwenCen old guard who haven't caught up with the times yet.

That was all for this time. See Peter Watt's own website for more information about him and his books.
Posted by Åka at 10:05 AM

A pretty interesting read, as this series of interviews tends to be.

Hi Anna,
My name is Erin and I am writing an article for the Toronto Star about steampunks. I was wondering if you might be able to talk to me today or tomorrow morning. Your name was passed along to me by Ad Astra. Please e-mail me at ecologicerin@gmail.com.
Thanks.
Erin