It has been a while, but here's the next installment in my series of interviews about the relationship between science and science fiction. I could have done it in a strict and scientific way, with the goal to find out and quantify how scientists and authors think about these things. You will notice that I have chosen to do it more like a conversation, with personal questions carrying assumptions and opinions in themselves. More fun for me, and still interesting for you! 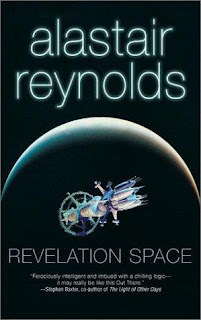 This time I have sent questions to Alastair Reynolds, author of six novels published with striking cover images of space ships and planets (or republished with a stylish abstract cover). He has a PhD in astronomy and used to work for ESA, but is now a full-time author. I first met him when he was a guest of honour at a convention in Uppsala.

Here are my questions, with answers from Alastair Reynolds.

Someone asked me if reading science fiction has influenced my choice of career. I'm not sure, actually. What about you, what are your thoughts about the relationship between your interest in science and science fiction?

I doubt that I can easily untangle which came first. I was interested in anything to do with space, and science, and the future, from a very early age. My impulse to be a scientist, and my impulse to write SF, both came out of that same drive. Certainly as I got older, I found that SF was one of the places where I was at least exposed to scientific concepts, even if I didn't have them fully explained until I looked elsewhere. Things like "weightlessness", "gas giant", "heat death of the universe". And some of the first science books I read were among the pop science texts of Asimov and Clarke, which led me into reading other non-fiction works.

What do you think: does science fiction have any effect on the public understanding of science, or is it only people of a scientific mindset who read sf anyway?

I think if SF has had any effect on the public understanding of science, it's probably been a detrimental one so far. I mean, what is the key image of the scientist in popular culture? It's Doctor Frankenstein, meddling in things he ought not to. Too often the face of science that SF presents to the world is a negative one, of hubris, of experiments going wrong and ending the world. I'm as guilty of this as anyone. I don't know if I'd say that it's exclusively people of a scientific mindset who read SF, but I would say that SF appeals to the questioning mind, and people of that persuasion are likely to be the ones who have the best grasp of scientific issues, among the general public. Certainly if you have a very non-questioning mindset, you're unlikely to be drawn to science as a field of interest.

What is your experience of the image of science fiction among scientists? While you were still combining a scientific career with writing, what did the people around you think of it? Did you ever get strange reactions?

My experience was much more positive than I might have imagined. It opened far more doors than it closed. In fact, colleagues whom I had never suspected of liking - or even tolerating - SF, came up to me and opened up about their interests, the books they had read and what they thought of them. That's not to say that there aren't scientists who dislike SF, but by and large I didn't meet too many of them.

I think the assumption is that if you come from a scientific background, you're only interested in nuts-and-bolts Hard SF, the kind where every statement has to be backed up by a page full of calculations. I can't think of anything more boring and futile, quite honestly. I do like some Hard SF - in fact I like a lot of it - but I'm just as enthused by the likes of Jonathan Carroll or China Mieville as I am by the usual hardcore suspects. I'm also resigned to the fact that everything I write will be examined through a critical filter of Hard SF assumptions - like, it's a given that I'm not interested in characterisation, or don't place a high premium on style or subtext, simply because other Hard SF writers don't. I am interested in these things, massively so.

As for the scientist as hero - well, I haven't got much more time for that than the idea as scientist as villain. Both are exaggerated extremes which seek to obscure the uncomfortable idea that scientists are living breathing human beings, with all the fallibilties that come with the package. Scientists get stuff right some of the time and get stuff wrong other times. But they shouldn't be put on any kind moral pedestal.
Posted by Åka at 11:22 PM